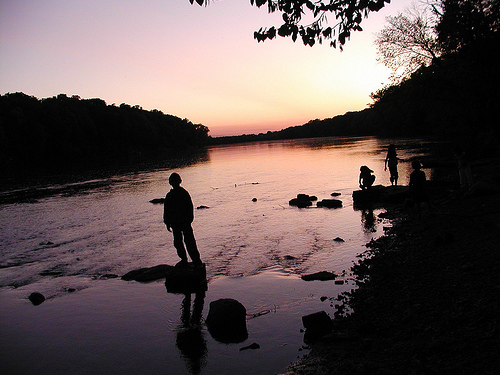 I remember being at Gramma’s house and my cousin Paul took me aside to show me a creek.
Gramma’s house was at the top of a hill in a town up north. You went up around a bend, passing houses that are deeply off the road, and then you turned left into her driveway. I call it a driveway now but it was more of a small, gravel parking lot. My memory tells me that the lot was enormous, standing at the road it looked like a whole world spread out before you. The grass was always emerald green and the house was a pleasant and comforting white. I remember that she had white Kawartha chairs on the grass and a matching white table to go with it. I also remember a vegetable garden and a firepit made from red bricks. I am certain though, that around the back Gramma’s was Dad’s old dune buggy. I think I rode in it. I definitely remember it. And I think, deep somewhere in one of my family’s forgotten photo albums, there is a picture of a very young Dad, younger than he could possibly ever have been, behind the wheel of that dune buggy, with a shit eating grin. Pictures from then aren’t colour but they aren’t black and white either and they aren’t sepia toned. They have the washed out colour of memory, if that makes any sense. And that was where I was when my cousin Paul took me aside to show me a creek.
I was the youngest of the cousins by ten years at least. The rest of them were teenagers and I was all of maybe six or seven years old. Possibly eight, but definitely not ten. These were teenagers that came ‘up north’ to be with family and old friends and to get into trouble that they ordinarily would not get into when in the city, though, I imagine, as they got older, the tricks they learned about getting in and out of trouble translated as well ‘up north’ as they did in the city. I didn’t really mix with them well. I played with action figures and colouring books and I read and I spent alot of time by myself.
I don’t remember what he said, and I’m not sure he even asked my parent’s permission. But he took me aside and wanted to show me something cool. I think he held my hand as we crossed the street and went into the bush. And the deeper he went the more curious I got as to where we were.
He pointed out some old shack well off the beaten path and he told me that Gramma and Grampa lived there for a while and my aunts and uncles were born in that shack. I never knew Grampa other than what Dad didn’t tell me about him, if you get my drift, but the knowledge that my family lived like wild people amazed me. I don’t remember where the creek was, but it couldn’t have been far from the shack where my grandparents lived.
He put his hand in the cold running water and invited me to do the same. My skin drank it up and it tasted delicious and I put both hands in. And that was when he showed me the crayfish. I didn’t exactly shit myself but I am sure I did scream. He showed me how to hold the crayfish and got me to turn it over in my hand to get a sense of it. He told me about how some crayfish have one claw bigger than the other because sometimes they fall off and a new one grows back. We were there for a long time, but before long, I realized that I wanted to know everything.
Paul died a long time ago. I really don’t remember when. But I think about him and those crayfish about once a month or so, if only for a fraction of a second. Like when I am learning something new or if I think that something can’t be done or when someone tells me that it just isn’t possible.

But it came back to me, most especially, this past week when it rained one whole heckuva lot around here and there were worms everywhere all over the driveway and Elena would not so much as step foot off the porch.I wanted to know what was wrong and she was scared of the worms because she thought they would hurt her. I only smiled and picked her up.
“Do you want to say hello to the worms?” I asked.
“Yeah,” she answered.
So I carried her down to the driveway and I sat on my haunches. I perched her on my knee, careful to keep her feet from touching the ground. I found the biggest worm that I could and I said hello.
“Say hello, Elena,” I said.
“Hello, wermin,” she said.
Please remember, that she is a huge fan of The Backyardigans and there is an episode where Tasha keeps a really clean house and Pablo comes to inspect it to see if she can be part of the clean house club but Tyrone and Austin have to get rid of one pesky worm they called wermin. I liked the episode myself – most especially because it was one of those where Pablo doesn’t take himself too seriously (like the episode where his spaceship is powered by pancakes and when asking for more pancakes, as an aside, he says ‘with blueberries if you got ’em’ ; kinda like he’s saying to the adults that might be watching ‘if you thought this shit is fucked up, yeah, I agree, but lets run with it and see where it takes us).
At any rate, you can skip the above paragraph. She called the worm a wemin.
I explained to her that worms really like the rain and when it does tain they come out to get as much water as they can. And when the rain goes away, they go back undergound and use the water to grow and get bigger and help the grass to grow. A simplified version of the worms duties, but it served our purposes.
“Do you want to touch it?” I asked.
“Mmmhmmm,” she said.
I waited. She didn’t move.
“You touch it, Daddy.”
“Okay,” I said, reaching out.
“Nooooo!”
“It’s okay,” I said. “Watch.”
I picked it up with one hand and put it in the palm of my other hand and showed it to her. I demonstrated how soft it was and how slimy it was and how interesting it felt. Her fine motor control is not all there just yet but she was careful not to press on the worm too hard. I tried my best to distinguish the head from the tail – the direction it was moving was it’s head, as far as I was concerned – and she wanted to know where it’s eyes were.
“Worms don’t have eyes,” I said.
“Then how can he see me?” she asked.
“He can feel me holding him and he can smell where he’s going.”
“He sees with his nose?” she asked.
“Kind of,” I shrugged.
“And you know what worms like best?”
“Water,” she said.
“Yes, but better than water?”
She shrugged her overshrug, that incredibly cute and huge lifting of the shoulders and pouting of her lips. It’s funny how her curly hair bobs when she does it.
“They like dirt. You want to put the worm back in the dirt.”
“You want to go to the dirt, little wormie?” she asked, talking real loud to it, bending down to make sure she was heard.
“Yeah, he does, Daddy,” she said to me.
So we picked him up and put him in the dirt. From the top of the step, I could hear the front door open and then close again, but not quite shut. We put the worm back in the dirt and Elena told him good bye and told him “Thank you very much for fixing my grass.”
I told her to go to the steps and sit down because we needed to get a wet wipe to clean her hands. My wife was there and she liked what she saw. She grabbed wet wipes for both of us.

I can't think of when I wasn't writing but the first story I remember creating was in Grade 6 and made from equal parts James Bond and Knight Rider. It's been a long time since then and I can't be sure my stories have gotten much better, but I keep it up because it hasn't stopped being just as fun. View all posts by Rob Rinne

Other parents talk to me about their kids sports activities. Some of it is house league others are higher levels. Soccer, softball, and hockey are the Big Three. It’s always good to hear but I have no similar stories to share. Because the kinds of things my son is interested in are all the things […]

To kick this off, this is NOT my image. It’s from this delightful person. But can you not see the potential for this kind of robot in our life? A robot dog designed to look like a frog that brews coffee and comes running when you need a cup. The higher end models don’t slurp […]